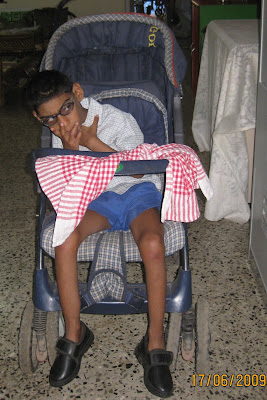 Jaisal Bakshi is ten year old Dandy-Walker Syndrome child. He was admitted in Swami Brahmanand Pratishthan, Centre for Mentally Challenged two years ago. During that time, his condition was quite severe. But, he has very loving family, who work very hard on his progress and they co-operate with the teachers at school in helping him cope with his problems. He has shown marked improvement during these two years, he has better coordination of muscle movements, is able to recognize and respond to insructions and loves Bollywood music.

Dandy-Walker syndrome (DWS) is a congenital (present at birth) brain malformation typically involving the fourth ventricle and the cerebellum. The disorder was first described in 1914 by W. Dandy and K. Blackfan and was designated as Dandy-Walker syndrome in 1954 by C. Benda, who also reported familial occurrence. DWS occurs in one out of every 25,000 live births.

The following characteristics have been seen in children with Dandy-Walker syndrome:

The majority of individuals with DWS are diagnosed their first year of life as a result of the commonly associated hydrocephalus. However, the definitive diagnosis can be made by ultrasound, CT-scan, or MRI.

Treatment consists of treating the associated symptoms (i.e., anticonvulsants for those with seizures and the insertion of a shunt for those with hydrocephalus). Balance problems and spasticity may occur and warrant physical therapy. Occupational therapy may be helpful for those with poor fine motor control.

The syndrome can appear dramatically, or be totally asymptomatic. Therefore, the prognosis for normal intellectual development varies depending on the severity of the syndrome and associated malformations. Difficulties in learning occur in 35-70% of children with DWS. Statistics in the literature citing a high rate of mental retardation most likely reflect injury due to inadequate management of the associated hydrocephalus, something which is less likely to occur today than in the past. Many children with DWS can be mainstreamed at school. Pediatricians, pediatric neurologists, pediatric neurosurgeons, geneticists, physical therapists, and educational specialists may be required to systematically follow these children and work towards ensuring that the child is given the best opportunities to reach his or her full potential.

Would appreciate your feedback. Thanks!

Autism Awareness Day falls on 2nd April. This is the day when people from all walks of life come together to spread the awareness about limi...

Persons with HI can talk if trained early in life. They can be educated & trained to lead a normal life. They do not need your sympathy. They need your support.

Physical disability is not due to sins in previous life.They can lead a normal life with proper rehabilitation.They do not need your sympathy. They need your support.

Mentally Retarded are not Mad.Person with Mental Retardation can be educated & trained to lead a normal life.
They do not need your sympathy. They need your support.
Come, Join us in this movement.

MD's need to be identified early in life.Take them to a therapist early.They do not need your sympathy. They need your support.